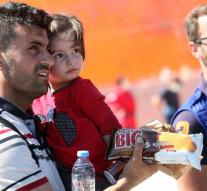 boekarest - Human smugglers are testing a new route to bring migrants from Turkey across the Black Sea to Romania. About five hundred migrants from the Middle East reached Romania this way in about a month, the Coast Guard said Monday.

According to the European Union, this sharp increase shows that smugglers test alternative routes in Europe. Since 2015, the EU is trying to reduce the number of refugees and migrants coming to Europe from the Middle East and Africa.

A 2016 agreement with Turkey to block the refugee route to Greece shows tearing through a new route from Libya to Italy. In recent months, the number of arrivals across the Mediterranean to the EU dropped from 28,000 migrants in June to less than 10,000 in August, according to data from the United Nations.