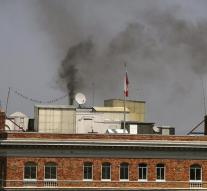 san francisco - There was a big black smoke from the chimney of the Russian Consulate in San Francisco on Friday. The smoke development was so strong that the fire brigade was taking pile height.

However, the injectors were told that nothing was going on. The consular staff was simply busy burning a 'something' in the fireplace. Haardhout will not have been because the temperature on Friday was tropical: about 35 degrees in the shade.

It is more likely that Russian diplomats were burning sensitive documents. The consulate must be closed by Saturday at the latest by the US government. It is a punishment, in response to the Russian expulsion of hundreds of US diplomats.