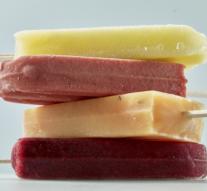 lostice - An ice cream made from a penetrant fragrant traditional cheese proves a surprise hit in the small Czech town of Lostice. The innovative product now flies over the counter.

Tvarůžek, or tvarůžky in plural, is a mature, yellowish cheese with a strong taste and smell that is usually eaten with bread, onions and possibly inevitable in the Czech beer.,, Many people think that the salt will be, but it's really quite a sweet cream with a tvarůžky cheese making, 'said café owner and ice maker Roman Cincara.

Cincara add sugar and other ingredients to putting them in balance with the cheese flavor and the aroma is somewhat suppressed by the low temperature.


He has now applied for a patent for his recipe. His cafe in the eastern city of Lostice sold last weekend all four hundred portions.

Tvarůžky has been produced since the fifteenth century in the eastern region of Olomouc. It got the status,, protected geographical indication '' of the European Union in 2010.