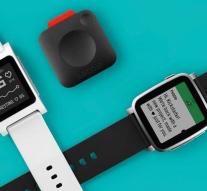 - Pebble is taken over by Fitbit. The maker of smart watches, which is included in the history books as the largest crowd ever fund successfully, immediately stop its activities.

Thereby get current owners of the Pebble watch no longer support their watch. Accessories remain on sale through third parties, as long as they have it in stock. The company also expects that the functionality will gradually decline in the coming period by stopping servers.

This rigorous step is remarkable. Pebble pulled in two stages over $ 40 million for its smart watches over the crowd fund platform Kickstarter. Until today there is no company that has a higher amount picked through crowdfunding.

Nevertheless, it was not all rosy for the company. Early this year, fired 40 of its approximately 150 employees and CEO Eric Migicovsky complained about bringing in new capital. Pebble was then already withdrawn from the growing list of 'unicorns': startups with a score of more than $ 1 billion.

How Fitbit pay for the business, is not clear. The maker of motion straps is particularly interested in the knowledge that Pebble has built on smart watches. A large part of the employees will go to work at Fitbit.

Pebble has a loyal fan base in the Netherlands. Through social media they respond disappointed by the decision to stop. Fitbit is accused of a competitor's neck to turn.