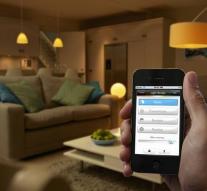 - Vulnerability is possible to hijack the smart lights Philips Hue called. This was announced by researchers at the Weizmann Institute of Science in Tel Aviv. It is the security experts managed to break in through a leak in the wireless ZigBee protocol at the communication between the lamps and the app.

ZigBee is a wireless standard that was developed in the 90s for communication between smart home appliances. However, the researchers have found an error in this, which makes it possible to send a so-called worm via this data traffic. This is a self-dispersing virus with which the control of the lamps is to take over.

For the hack method it is important to be close to the target. ZigBee is in fact a local area network technology and can not be reached via the Internet. A hacker will also have to be present within a radius of several tens of meters to make a cracking.

Philips has the vulnerability addressed by a software update. Owners of the lamps is recommended to download a patch via its app and install.

The greatest danger of hacking of smart devices is not that effective control is hijacked it. The problem is more that they can be used in turn for other attacks. In October the Internet on the east coast of the United States lay flat for several hours after hackers hijacked by security cameras of a Chinese producer.