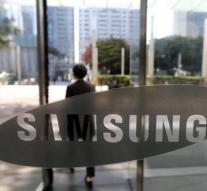 seoul - Bixby, the clever help of Samsung, can speak and understand English as well. This means that the assistant is also available outside South Korea's home country. Samsung had a lot of trouble communicating the English system.

Bixby speaks American English and is in an update released on Wednesday for the Galaxy S8 and S8 Plus in the United States.

Other languages ​​and devices to follow in the future. For example, the smart Samsung speaker Vega should also get Bixby. It may also be possible to get help on Samsung refrigerators.

Bixby must be a competitor of, for example, Siri (Apple), Assistant (Google), Alexa (Amazon) and Cortana (Microsoft).