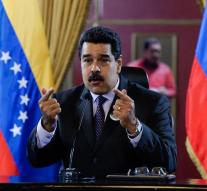 caracas - The opposition in Venezuela has achieved a small victory in the effort to get rid of the socialist president Nicolás Maduro. She took the required number of signatures in all states of the country so that a new step can be put toward a referendum on the status of Maduro and his party.

Opinion polls show that Maduro will probably be voted down in a possible referendum.

The opposition managed to get a signature for the referendum one percent of the population in all 24 states of Venezuela. In a next phase requires twenty percent of the signatures, but a date to begin with this is not pinned yet.

Derksen is looking for a host family dog