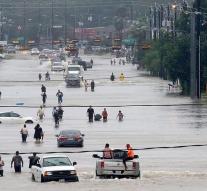 houston - The wind has long been the problem for residents of the states of Texas and Louisiana that are affected by the tropical storm of Harvey. The storm, however, moves so slowly that the clouds accompanying him in many places cause heavy, lasting rain. That will be the same.

According to Weatherplaza in Hilversum, residents of the heavily affected Texan city of Houston a little bit on Monday: the rain area lies north and east of the city, which temporarily illuminates. Temporarily, because all that water eventually flows through Houston to the Gulf of Mexico.

SEE ALSO: Texas is waiting for a new flood

The vast area of ​​heavy rain and thunder that Harvey currently covers creeps with a snail of 6 kilometers per hour in the eastern direction. This means that Louisiana, which is east of Texas, is almost certainly flooded.