Home / World / Slovenia shall train with refugees from 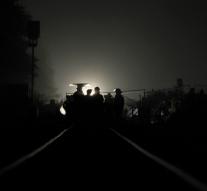 - Some 2,000 refugees have the night of Sunday to Monday spent in Croatia in a train , because the train Slovenian authorities refused to enter the country . Slovenia says the flood , which grew after Hungary Friday closed the border with Croatia , not to anymore. Many migrants therefore now trying to reach Western Europe via Slovenia .

The Slovenian authorities announced Sunday already know that it can take up to 2,500 to 3,000 refugees a day, to register and send them to Austria.

Slovenia said Sunday that Austria, however, up to 1,500 migrants will allow per day. Slovenia is therefore to stop a problem and decided Sunday night so the train to the border with Croatia. To the Croatian - Serbian border, thousands of refugees spent the night in the open air.

" Open the gate ", they called Monday morning , completely numb and tired. They were entering Serbia from Croatia , but the Croatian authorities did not allow. The refugee camps in Croatia are full, now that migrants can not go through the congestion at the border with Slovenia.