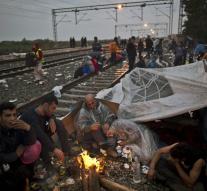 - Slovenian Prime Minister Miro Cerar has criticized the refugee policy of neighboring Croatia . In an interview with the German newspaper Die Welt , he said Wednesday that Croatia does not respond to the request for enhanced information exchange and cooperation in the field of refugees.

" From an EU country , I had other behavior expected ", Cerar said. " Croatia is not complying with agreements on border crossings and the number of refugees is sent to Slovenia . "

The border between Croatia and Slovenia was Tuesday stormed by refugees. Slovenia has stated that the country per day up to 2,500 people can admit, but Croatia does not seem to respond to this. Monday Slovenia received least 5,000 migrants.

The country has previously criticized Croatia voiced because of the lax attitude of that country. Migrants could freely travel to Slovenia. Slovenia wants to use the army to the border with Croatia.

The parliament Wednesday approved legislation that turn allows military for border surveillance. Slovenia Wednesday is expected to ask the European Union for financial support and additional police officers to control the flow of refugees.