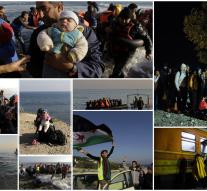 - Slovakia goes to court for the distribution of refugees in the European Union. The mandatory distribution of 120,000 refugees across the union was approved by a majority in September by the interior ministers of all member states.

Slovakia, Hungary and Romania voted against the allocation. Prime Minister Robert Fico of Slovakia said Sunday that he steps on December 18 to the European Court of Justice. The Hungarian Parliament, the government of that country to take action earlier permission. Czech Republic and Romania have stated not to go to court.

Slovakia must cope with the scale 802 refugees, but argues that it can do nothing if the refugees leave for Germany and other wealthier European countries. This year, 154 people applied for asylum in the Eastern European country.