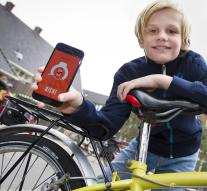 the hague - Telecom Provider KPN, together with Safe Traffic Netherlands (VVN), brings a smart bike lock at the end of the year. The lock locks a mobile phone as soon as the bicycle is locked. That's what KPN announced on Wednesday.

The smart lock, the Safe Lock, must contribute to road safety, especially in children. One in five bike crashes in children comes through the use of a smartphone. In 2015, according to VVN figures, a total of 441 children were injured by bicycle accidents and twelve came to life.

The Safe Lock is a bicycle lock that is connected to an app on the phone. With the app, the cyclist opens the lock. When it's open, the app sends a signal to the mobile network that temporarily stops data and phone traffic. As soon as the lock closes, the phone and data traffic is released again.

The Safe Lock is still optimized this summer. At the end of the year it will be around 100 euros in stores. For now, the lock only works with Android devices.