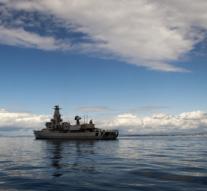 athens - The number of refugees trying to reach from Turkey over the Aegean Sea Greece, last month increased slightly. But of a large influx has been up to now no question.

Thus came last weekend 206 migrants on Greek islands near Turkey. In Greek camps are currently about 10 000 refugees pending the processing of their asylum claim or return to Turkey. A month ago, there were still 8500.

Especially on the islands of Chios and Lesvos are still packed many migrants, said a spokesman for the Greek coastguard. Inter alia also because Turkey had withdrawn a number of observers after the failed coup and still has not sent substitutes. These observers decide which refugees whose asylum application has been rejected are returned to Turkey.