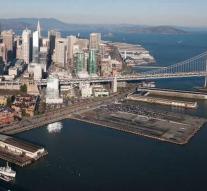 - A skyscraper in the US city of San Francisco sinks slowly into the ground. This is because the piles of the Millennium Tower is not good ground in his beaten. Each year the tower sinks a few centimeters. The building was completed in 2009.

Two satellites of the European Space Agency, specially designed to measure subsidence, have analyzed the tower.

The Millennium Tower is almost 200 meters high. The last time begins to tilt the building. Residents of the city comparing the structure all with the tower of Pisa. San Francisco has a couple of weeks ago filed a lawsuit against the developers.