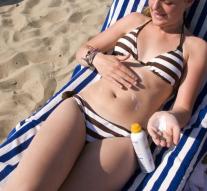 In women under the age of 40 there is an increase of 6 per cent of the basal cell carcinoma annually, the most common form of skin cancer. In young men it is about 4 percent. The Dutch Cancer Registration confirms this increase in the number of 'young' patients (under 65 years) with skin cancers.

'There is a striking agreement among all 2200 patients a year undergoing surgery in our hospital,' says Wakkee. 'Most of them have been a lot in the sun as a child. Lots of outside played, with their parents traveling to sunny places, often at the beach, often not or badly protected. When already the skin attack began. '

With the summer holiday at the door, the Stichting Melanoom points out parents of young children to protect their crop well from the sun. Today the foundation launches the #funinthesun campaign. In 2016 a melanoma was detected in 6800 people in the Netherlands. All skin cancer patients meet 52,000 new patients in the Netherlands each year.

'Spread them!' 'The foundation drives everyone under the nose. 'Easier said than done,' realized Astrid Nollen of the Melanoom Foundation. 'Most children do not feel like being smeared at all. They find the hassle and sometimes struggle. '

Tóch, also attends doctor Marlies Wakkee. 'Make a game of it. It's so important. Early sunburn puts a malignant germ for later. '

'Put the sunscreen next to the toothpaste and make a morning rhythm polish. Or a game: put a clink of sunburn on your nose, which finds children funny, 'advises Stichting Melanoom.

The foundation stated earlier that more than 40 percent of the Dutch do not always feed their children (up to 16 years) when they enter the sun.