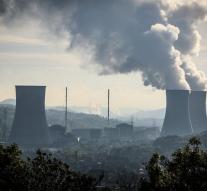 brussels - In the Belgian Tihange in Liege incorporated five steel components that are tampered. The declared French producer Creusot overheated the forgings at too low a temperature and treated a second time without the documentation.

The 'sjoemelstaal' was used in the eighties of the last century in the reactor vessel Tihange 2, also known as the 'central cracks' due to irregularities in the reactor vessel. Tihange but also Doel nuclear power plant near Antwerp, has been repeatedly shut down and causing concern in neighboring Germany, the Netherlands and Luxembourg.


According Creusots parent company Areva is four hundred components for power plants in France and abroad something went wrong with the quality. The French nuclear safety regulator ASN gave a final summary of the state of affairs on June 16.

Incidentally, the reactor Tihange 1, which was expelled in April for maintenance, night will restart. That's a few days later than planned because,, finishing the last settings. The maintenance is necessary because Belgium has decided its two nuclear power ten years longer than planned to keep it open until 2025.