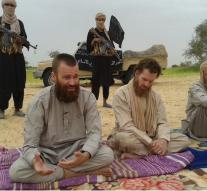 stockholm - Al Qaeda in Mali released the Swedish hostage Johan Gustafsson, 42, after nearly six years. That has been announced by the Swedish Ministry of Foreign Affairs on Monday.

Gustafsson was kidnapped in 2011 with the Dutch engineer Sjaak Rijke and the South African Stephen McGowan during a motorcycle ride in Mali. By 2015, Rijke was released by chance by an action by French soldiers. The fate of their South African travel companion remains invisible.

According to Swedish media, the abductors had previously requested 5 million ransom for the release of Gustafsson. The Swedish Ministry does not respond to questions about ransom and only reports that 'considerable effort' has been made to release Gustafsson.