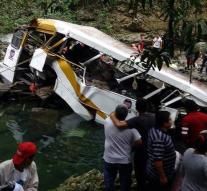 - In a bus accident in Mexico Sunday sixteen people were killed and ten passengers were injured. The bus crashed near the city of Córdoba in the Veracruz region in the east of the country into a ravine. According to witnesses, the driver would have driven too hard.

According to local media were on the bus players in an amateur football team who were traveling with their parents to an away game.