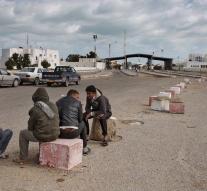 benghazi - Libyan armed forces found sixteen bodies in the desert on the border with Egypt. According to the Libyan National Army of General Khalifa Haftar, it is about migrants, but is not known where they come from.

In the east of Libya, more bodies are found. It used to be in the past about Egyptians who came across the desert. They were abandoned by smugglers.

In Libya, outsiders seek employment, but the North African country is also an important starting point for traveling to Europe by boat.