Home / World / Six whales died in Canada for a month 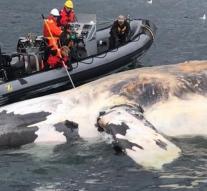 toronto - Since the beginning of this month, six dead north capers, a threatened whale species, have been found on the coast of Canada. Marine biologists and animal organizations are worried. Not before did they do this on this scale, the Canadian public broadcaster CBC News reports.

Whales were found all six in Saint Lawrence Bay in southeastern Canada. The Ministry of Fisheries and Oceans estimates the total number of north capers in five hundred. Six dead whales, including two females, are a major slaughter for the population of these mammals, suggesting animal organizations.

They have no idea where the animals died and are still puzzling. In order to get rid of it, it must be done, but it is not an easy task to get whales that weigh up to ninety tons to get sheltered on land.