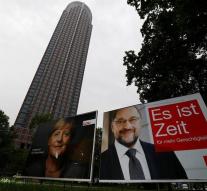 Sunday, 61.5 million Germans can vote. There are over 4800 candidates for 598 seats. The voters vote in the 299 constituencies twice, once upon the candidate of their choice and one at the party of their choice. As a result of the system that divides the seats, the number of parliamentarians may then exceed 598.