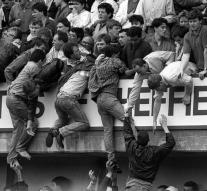 sheffield - The British judiciary charged six people on Wednesday with regard to the stadium ramp in Hillsborough in Sheffield in 1989. As a result, 96 football fans were killed.

Among the accused, former police officer David Duckenfield was in charge of the police during the disaster. He is charged with death by gross negligence in 95 cases. The other accused are other police officers and a security officer in the stadium. A lawyer is being prosecuted because of the impediment of the trial.

The disaster occurred in the semi-finals of the FA Cup, in the match between Liverpool and Nottingham Forest. Supporters hit the crowded stadium in the outdated stadium and were unable to find out in overall chaos.

The police initially committed blame to drunk fans. Among other things, statements were made. The relatives fought police's reading and campaigned to punish the guilty. The UK government apologized in 2012.

Duckenfield stated that fans had forced a gateway to the Hillsborough stadium, causing too many people to be in the stand. In 2015, he only admitted he had lied. 'Everyone knew the truth that we had opened the gates themselves,' he said.

The stadium ramp in Hillsborough is the worst sporting disaster in British history.