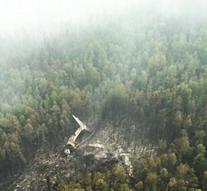 moscow - At least six people have been killed by the crash of a Russian cargo plane in Siberia. The device disappeared Friday from radar during a firefighting mission.

Sunday the fragments of the Ilyushin 76 were found in a wooded area near Irkutsk. Only the tail was still intact.

According to news agency RIA six bodies have been recovered. Ten crew members would have been on board. The search for survivors continues both from the air and on the ground.