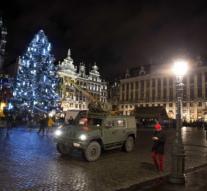 It was not only in the foiled attacks to so-called 'lone wolves' or 'home grown terrorists' go. 'There may also still form networks. We are prepared for anything. We see a clear profile of the perpetrators. They are often petty criminals who were not sufficiently integrated into our society, 'as Jacob said in an interview with Time.

According to Jacobs, the informants in local communities have become increasingly important. 'Many people from the Muslim community do not agree with the terrorists and help the police. (...) It is a wrong debate to speak about 'Islam'. It is a minority. '