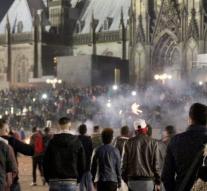 - The German judiciary has sentenced six people so far after the large-scale assaults during past old and new in Cologne. That made the government of North Rhine-Westphalia on Friday, after asking in the regional parliament.

Four convicts were given suspended prison sentences, one person is still in custody pending an appeal. The sixth person was given a youth sentence, but was acquitted of the sexual offense of which he was suspected.

Police in Cologne received after the turn of the year a total of 1205 reports in which more than five hundred of sexual violence. That few people have been convicted, because the police could identify only a few suspects.