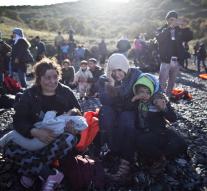 - In two car accidents off the Turkish coast in the Aegean Sea, six children were drowned.

A boat with 55 migrants who were en route to the Greek island of Lesbos has sunk, leaving four children died. According to the Turkish news agency Anadolu were 51 crew members are rescued.

Off the coast of the Turkish city of Bodrum hit a boat with seventeen refugees. Fifteen people were rescued from the water, but two children drowned.