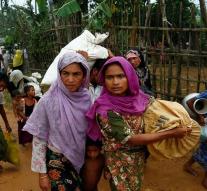 bangkok - The future for the Rohingya Muslims of Myanmar seems to be a clear view of the day. Since fierce fighting between the army and a militant Muslim group unleashed in the west of the country on Friday, thousands of people have been fleeing again.

According to Human Rights Watch, the army has strengthened its military force in the north of the western state of Rakhine, where the Rohingya lives. Satellite imagery shows how large areas are in light sheets and the flames have wiped many houses away.

The violence broke out after militants of the Arakan Rohingya Salvation Army conducted a coordinated attack on thirty police stations in the west of the country. With knives, sticks and homemade explosives, they dared to destroy the much better armed security forces.

Certainly 100 people have died in violence, including eighty militants and twelve agents. But the actual number of deaths is probably significantly higher. Certainly 18,000 Rohingya, especially women and children, fled to neighboring Bangladesh. Many, however, are returned to the border by road. Buddhists in the area sought refuge in cities and temples.

The Rohingya who can safely reach the border says that the army and police raped women and burned their homes. It would also be shot on them. The authorities deny this and refuse to allow journalists or researchers in the closed area.

The Rohingya has lived in western Myanmar for centuries. But the government of the country refuses to recognize them as citizens. The Buddhist population sees them as unwanted invaders. Many Rohingya are the victims of pogroms by Buddhists, enlightened by influential ultranationalist monks.

In a wave of violence last October, eyewitnesses described how Rohingya was thrown out of their house by robbers and shot down, raped women, and even killed children. The United Nations previously labeled them as the most persecuted nation in the world.

A statement that appeared on one of Suu Kyi's official Facebook pages this week claims that helpers have helped to attack a village in Rakhine by 'terrorists.' A photo of a UN World Food Program biscuit was also found that would have been found in a camp where terrorists sheltered.

Zeid Ra'ad Al Hussein, the High Commissioner for Human Rights of the United Nations, reacted strongly with the violence and 'irresponsible' allegations by the Maynmar government without any evidence that could endanger those who are in need. Suu Kyi's staff were then quick to remove the statements.