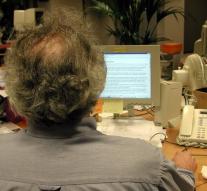 utrecht - Through the Internet to transfer data from children whose grandparents touch the foundation for My Grandchild violates their privacy and that of their parents. Reported AP, the Authority Personal Tuesday. What the foundation is in breach of the Data Protection Act. The authority threatens action if the process is not changed.

for my grandchild on the site. en may grandparents against their will no contact with their grandchild a page for him or her to create and then post. Who in a search engine type in the name and surname of a child, can end up with this page.

'' It can be for a child, which is still often in a vulnerable position, very stressful. That should not, '' says Wilbert Tomesen the AP. '' From such a call to contact you can deduce that there are problematic family circumstances. This is very sensitive information about a child and his parents. ''

The parents or the child, as long as sixteen years of age, can ask to remove the personal data. The foundation does not, then the matter may be brought before the court.

The foundation has edited the data on the site to the first letter of the surname. Visitors must now first obtain a password, and the messages are also seen only as grandparents consent. But that, according to the authority is not enough.