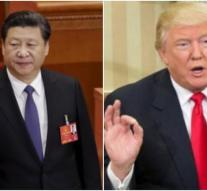 - Cooperation between China and the United States is the only good choice as regards the relations between the two largest economies in the world. That message is conveyed Chinese President Xi Jinping Monday to Donald Trump, future president of the USA

According to state television CCTV machines Xi said that both countries benefit most from cooperation and the pursuit of economic growth must be coordinated. It should also be close cooperation in all other areas.

Trump would have said, according to CCTV to be willing to strengthen cooperation between the two countries. It was agreed that the two leaders continue to keep contact and will meet soon. The newly elected Trump pulled out frequently to China in the election campaign. The country was manipulating the value of its currency and steal jobs from the US Trump has threatened to introduce import duties on Chinese products.