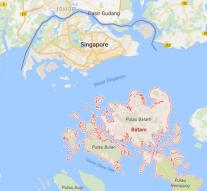 - Singapore has the security measures at the border and screwed in the interior. That happened after the police had arrested six militants in Indonesia were planning an attack in Singapore, according to the Interior Ministry on Friday.

The six were arrested on the Indonesian island of Batam across the Singapore Strait. Singapore has the reputation of being one of the safest countries in the world and has never had to deal with an attack by Islamists.