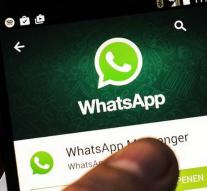 - Courts in Europe should have easier access to encrypted communications of terrorists and criminals.

Message services like Whatsapp Telegram and should be required to work with, even if they have their headquarters outside Europe. That said, the German and French interior ministers Thomas de Maiziere and Bernard Cazeneuve Tuesday.

The proposal is a joint document on European security policy which will bring the two ministers to their partners in the European Union. They want the European Commission to all providers of Internet as well as telephone calls, imposes similar requirements, for example to remove illegal content or messages to decrypt important for research.


How this is to work exactly and what penalties may be imposed, the piece still leaves open.