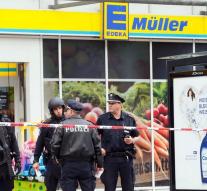 hamburg - The man who attacked several people in a supermarket in Hamburg with a large kitchen knife on Friday was a well-known one of the authorities. There were signs of radicalization, was announced at a press conference on Saturday. The Islamic man also had psychological problems. However, the authorities did not see him in acute danger, he was not a jihadist.

According to the police, the man only acted, there are no signals that he had ties with a terrorist group or that there were accomplices. However, further research is being carried out.

At the attack, a fifty-year-old customer turned around. Five people were injured, some of whom were serious. A sixth person suffered injuries when he helped to overthrow the suspect after a chase. All injured are out of danger of life.

The 26-year-old suspect was born in the United Arab Emirates. He could not turn Germany off because he had no papers. 'It makes me angry that the man came to Germany for protection and then turned his hatred on us,' says Olaf Scholz, Mayor of Hamburg on Facebook. 'Again, it is a signal that these legal obstructions should be removed from expulsions. 'The authorities call on the Germans not to be afraid of the attack and not to be guided by hatred.

The striking party took place in a branch of the Edeka chain in the district of Barmbek, on the north side of the center of the port city.