Home / World / Shots at US posts in Turkey 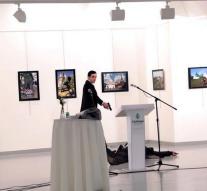 istanbul - The US Embassy and consulates in Istanbul and Adana remain closed Tuesday after someone in the night of Monday to Tuesday fired shots at the embassy building in Ankara. No one was injured and the gunman was arrested.

The shooting followed the murder of the Russian ambassador in Turkey. Andrei Karlov was shot in the back while he gave a speech at the opening of a photo exhibition. The perpetrator, a 22-year-old policeman shouted: ' Do not Aleppo. '' He was shot after his act itself.

According to the Turkish news agency Anadolu fired the man who a few hours later hit outside the US embassy eight or nine bullets. He could be arrested.