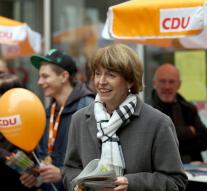 cologne - The German politician stabbed Henriette Reker regained consciousness . The 58 -year-old Reker got seriously injured Saturday when she was attacked by a man with a knife. An emergency operation that day was successful. On Monday she was taken out of an artificial coma , reported the newspaper Rheinische Post.

Reker injured her windpipe and esophagus.

It is not yet clear when they can leave the intensive care unit of the hospital in Cologne.

It is expected that they will completely recover. Reker won Sunday's mayoral election in Cologne. The 44 -year-old man who stabbed her're stuck. He would have committed the attack because he did not agree with asylum in Germany.

The man, according to the Rheinische Post in 1998 already convicted of inflicting grievous body injury.