Home / World / Shooting was justified on the 12 -year-old 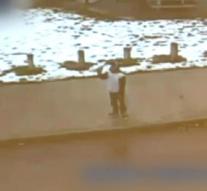 - The American agent who last year a 12 year-old boy shot dead who walked around with a toy gun had this a "good reason" . That two expert witnesses testified to the US courts, according to US media.

The boy, Tamir Rice , was seriously injured and later dies in hospital. Agent Tim Loehmann felt threatened in their own words because he thought the gun was real. The experts , a prosecutor and a former FBI agent , found that the action of the police officer "legitimate" was.The tragic incident happened last November in Cleveland in Ohio.

A passerby saw Rice play with the toy gun and called the police. He pointed out in the call that the gun was probably not real. This addition later proved to be not passed to the agent who came to the alert.