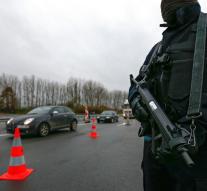 - French police Tuesday afternoon a district of the port city of Boulogne-sur-Mer sealed off. According to the newspaper La Voix du Nord are then heard shots in the residential district of Le Chemin-Vert on the northern edge of the city. There would have been shot with automatic weapons, according to eyewitnesses.

The encirclement of part of the district is under the state of emergency declared after the bloody attacks on Friday in Paris. La Voix du Nord reported that the raid in the " problem area " initially for the night of Tuesday to Wednesday was scheduled, but has been brought forward.