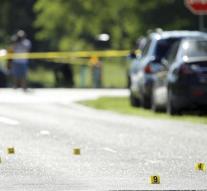 - The shooting at a nightclub in Fort Myers (Florida) which took the lives of two teenagers, was not a terrorist act of violence. In addition to the two fatalities, boys of fourteen and eighteen, there are cases seventeen injured. Some are bad condition, police said.

,, The investigation has been hard at work to find a motive, '' a police spokesman said Monday.,, We can confirm that this case has no terrorist background as suggested. '' There are three people arrested.

Six weeks ago, a gunman with jihadist sympathies created a bloodbath in a nightclub in Orlando, also in Florida. The hail of bullets killed 49 visitors.