Home / World / 'Shooter Texas was rejected by a girl in class' 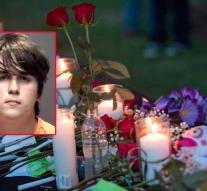 santa fe - Dimitrios Pagourtzis, the shooter who killed ten people at the school in Santa Fe, was rejected in class a week ago by a girl with whom he wanted a date. That says the mother of the Shana Fisher who died in the shooting.

The 16-year-old Shana would have got up in class a week ago and Dimitrios said she did not want a date with him. She did so after the boy began to approach her more and more aggressively. 'Then she put him in the classroom,' said the mother.

The 17-year-old boy tried, according to the mother, four months to arrange a date with Shana. The shooter would have created it with a friend of Shana, writes CNN.

The authorities have not yet made any statements about the shooter's motive. According to his lawyer, he makes a 'disoriented impression'.