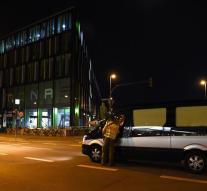 - The massacre in Munich was caused by an eighteen-year-old Iranian-German man from Munich. His motive and background are not yet known. That informed the police of the Bavarian capital on the night of Friday to Saturday.

The man acted alone. Previously there were three possible shooters. Two others came into the picture because they are hard with their car drove away from the Olympia shopping center. They were found and appeared to have nothing to do with the massacre.

The man was not known to the police. He began his work at a fast food restaurant and then went to the shops. Then he hit on the run. A kilometer away, he was found dead. He shot nine people. Moreover, 21 people were injured, three of whom seriously injured.


In the search for the perpetrator 2300 agents were involved, including elite units and police officers from Austria.