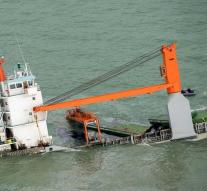 newport - Two ships collided off the Belgian coast together. The Pacifica freighter and oil tanker King Emerald anchored, but the strong winds Saturday slammed them against each other.

The incident happened at about 10 kilometers off the coast near Newport. The damage to the Emerald was limited, so the tanker on its own could sail to Antwerp. The Pacific was heavily damaged. The cargo ship is towed to Vlissingen, where it will be restored in a large yard.

,, There was no risk of pollution ', 'confirmed a spokeswoman for Philippe De Backer, Secretary for Combating social fraud, privacy and the North Sea, Tuesday. There was wind,, 7. A committee will investigate the accident. ''


It is the second major incident in the North Sea in a year. The Dutch freighter sank Flinterstar in October after a collision with a gas tanker. The spokeswoman expects the last wreckage next month have been removed.