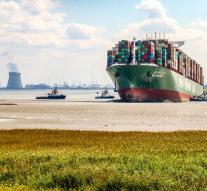 antwerp - The container ship that stuck on the Westerschelde on Monday had a problem with the helm. That has revealed an inspection. What caused the problem is further investigated. 'We still need to determine what was wrong, there is a lot of mechanics behind,' says a spokeswoman from the Port of Antwerp, where the ship is on a dock.

The container ship CSCL Jupiter stranded at the Zeeland village of Bath. The crowd flowed, causing clogged roads. Monday evening, twelve tugs lost the 366 meter long, after which it was dragged back to Antwerp.