Home / World / Ship in the English Channel in trouble 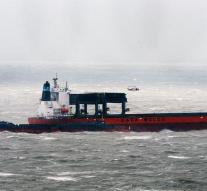 - A large cargo ship on Sunday for the English coast at Dover in trouble after a collision with a barge loaded with stones. Part of the crew has been in a storm on board because the ship was water, British media reported.

The ship, the Saga Sky, is 200 meters long and is registered in Hong Kong. It came in the Channel at the height of Samphire Hoe, just south of Dover in trouble.

In southwest England homes will be without power due to the storm that plagues the British coasts with winds of nearly 135 kilometers per hour.

On the other side of the Channel raging storm too fierce. In the center of Antwerp on Sunday hit a woman critically injured when scaffolding omwaaiden and ended up on her. Parks and cemeteries were closed as a precaution in the city. Rail traffic to and from the Belgian province of West Flanders experiencing great discomfort caused by the storm. At the emergency state in this province the phone ringing off the hook, reported local media.