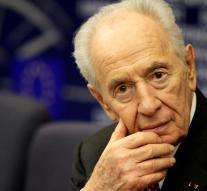 - Wednesday deceased Shimon Peres (93) was for decades not to imagine Israeli politics. He was there when the Jewish state was late 40s shape and was considered the last surviving founding father of modern Israel. Peres began his political career as a compromise figure, but eventually put all efforts to make peace with the Palestinians.

' I have not changed, I think the situation has changed, '' Peres explained the turnaround he ever made earlier this year in an interview with Time Magazine. ' As long as Israel's survival was in danger, I was what you might call a hawk. Once I noticed that the Arabs were open to negotiations, I said that we do prefer. ''

That constructive approach led in 1993 to the so-called Oslo Accords between Israel and the Palestinians. The agreements on Palestinian self-rule brought Peres, former Prime Minister Yitzhak Rabin and Palestinian leader Yasser Arafat in 1994, the Nobel Peace Prize.

Eventually, the Oslo Accords did not lead to a reduction of violence in the Middle East. Yet Peres never lost confidence in the future. In 2001, when the relationship between the Palestinians and Israelis again reached a low point, he remained as Foreign Minister in favor of dialogue.

Yet there was also much criticism of Peres, both within his own Labour Party and beyond. During his premiership in 1996, the Israeli army erected a bloodbath in the southern Lebanese town of Qana. Over a hundred people came to then. He also was part of the government of Ariel Sharon who was responsible critics for the expansion of the number of Jewish settlements and the outbreak of the second Palestinian uprising in September 2000.

Shimon Peres (Perski) was born in the Polish Vishneva in August 1923. In 1934 the family emigrated to Tel Aviv. In 1943 he became secretary of the youth wing of the Labour Party, and his star rose quickly. In 1947 he became a member of the Haganah, the underground Jewish military organization, where he was responsible for arms sales and recruitment. In 1953, Peres became Minister of Defence at the age of 29.\n  \n  \n   advertisement