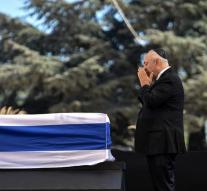 jerusalem - After a memorial service with 3000 invited guests, the body of former Israeli President Shimon Peres Friday interred at the national cemetery on Mount Herzl in Jerusalem. The Nobel Peace Prize winner died Wednesday at the age of 93 from the effects of a severe brain hemorrhage two weeks earlier.

US President Obama called to continue in his eulogy on the peace efforts of Peres. ' The responsibility lies in the hands of the next generation of Israel, '' he said, with Israeli Prime Minister Netanyahu and President Abbas of the Palestinian Authority in the audience. Netanyahu and Abbas, who could come to the table in recent years, but not with each other, had spoken to each other shortly before the ceremony and shaken hands.

The ceremonies were surrounded by strict security. More than 8,000 policemen had been closed on the leg and streets in the center of Jerusalem. More than seventy countries were represented; on behalf of the Dutch government was Prime Minister Mark Rutte present.

Peres has his dream of peace did not see come true, Obama said. Peres had understood: ' The Jews are not intended to rule over another people, '' said the US president. At the same time he criticized the fact that too many Arabs since childhood instilled hatred against Israel. Former President Bill Clinton said Peres by his critics often ' naive, overly optimistic dreamer '' was depicted. ' They had the only fault with the naive part. ''

Netanyahu praised Peres ' as one of the greatest leaders of our people. '' The current President Rivlin said his death ' a huge personal and national loss '' and the end of the era of giants ' ''.

Israel's most famous writer, Amos Oz, called for the continuation of Peres' efforts for a peaceful settlement in the Middle East. An agreement with the Palestinians is not only possible but also necessary, said Oz. ' But where are the successors of Peres? 'He wondered.