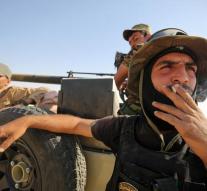 baghdad - Iraqi Shiite militias on Saturday launched an attack on positions of the group Islamic State west of Mosul. In a statement announced the militias backed by Iran Tal Afar is one of the cities ' to be liberated. '

Turkey's operation will probably follow worried. Tal Afar is not far from the Turkish border. The city also has a significant Turkmen community.