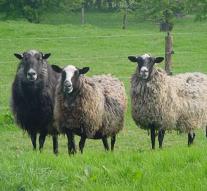 - A shepherd and his 140 sheep Tuesday in the German state of North Rhine- Westphalia rescued when they got into trouble by high water. The fire led to several rescue boats.

It went wrong in the locality Troisdorf, near Cologne. As the shepherd with his sheep standing on a flooded meadow. For twenty animals help came too late. Some were dead before they were picked up by the fire brigade.

The beasts were grazing near a river. The water level had risen sharply in recent days by heavy rains. Eventually shepherd and sheep were trapped by the rising water. Why shepherd the situation is not good internal assessment unclear.