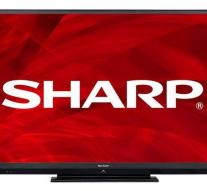 - Sharp thinks IGZO screens are the future of television. Japanese screen manufacturer shows at the IFA fair in Berlin also plenty of these screens of indium, gallium and zinc oxide are made instead of silicon.

The new material can increase with smaller transistors, so you can have more pixels on the screen. So 8k resolutions are possible. The light transmittance of the screens is also 20 percent higher than for OLED screens. The screens can therefore be even more ferocious. Because the transistors can be placed behind the screen and not on the sides, are possible screens that extend to the edge of the TV.

Sharp has the IGZO technology, which was developed at a Japanese university, in-licensed. The company will roll first into mass production.