Home / World / Shark in Greenland was born around 1624 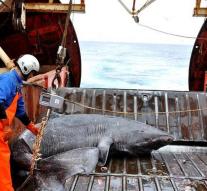 copenhagen - That the Greenland shark can be extremely old, was already known. But Danish scientists have now discovered how old. One of the sharks is probably 392 years old, and possibly even 512 years.

If the shark is indeed 392 years old, he must have been born around 1624. In that year established the first Dutch settlers in America. A year later they built Fort Amsterdam, which is now the city of New York.

The researchers studied a total of 28 Greenland sharks. They also discovered that only females are sexually mature when they are 134 years old.


A Greenland shark grows very slowly, about one centimeter per year. Still, they may be more than five meters long. Hence it was clear that they must be very old.

The sharks live mostly in Greenland and Iceland. Since the meat is a delicacy, kæstur hákarl called. The meat is only edible months as it has fermented under the ground. As a result, it gets a pungent odor, similar to ammonia.

If the correct age, Greenland sharks are the oldest vertebrates in the world. Those are the bowhead whales, which can be 211.