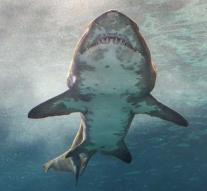 newcomb hollow - A man who was swimming near the coast of the US state of Massachusetts was attacked by a shark on Saturday. He did not survive the bites of the animal.

According to local media, it is the first fatal shark attack on a man in eighty years. The victim would be a man in his mid-twenties, swimming a bit at the Newcomb Hollow beach in Wellfleet.

Emergency services have tried to resuscitate the man who had sustained serious injuries, but that was of no avail. He was officially declared dead in the hospital. Who is the victim is still unclear.

It is also not known what kind of shark the man came into contact with.