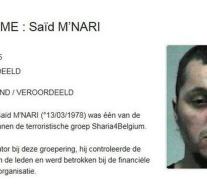 antwerp - Police in Antwerp have arrested one of the ringleaders of Sharia4Belgium. Said M'Nari'd recently returned from Syria where he had joined Islamic terrorist groups, the Flemish station VRT reported Saturday. Late last year the Federal Prosecutor spread a message about detection M'Nari.

M'Nari gold within Sharia4Belgium initially as coordinator and worked on the finances. After the arrest of leader and founder Fouad Belkacem, he took over the managerial tasks of the terrorist organization itself. In March 2013 he left for Syria.

While M'Nari was in Syria, he was sentenced in absentia to two major terrorism cases. Sharia4Belgium in the process he was twelve years in prison. He was sentenced on appeal in Mechelen terror dossier.

'Liquidations Utrecht only the beginning '